After starting in London and then spreading to various other European Cities, the Atheist Bus Campaign is a private-sponsor funded project created to make people aware of the rather high probability that there is indeed no god: 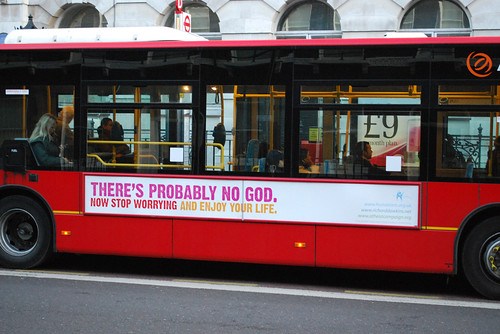 The campaign created quite a stir and currently the organizers are raising more money to fund similar projects. Which leads me to the point of this very entry. In Vienna it was planned to have an adapted German message cruising the city on buses of the “Wiener Linien“, the municipal transportation service.

Only turns out it won’t be so, according to the website of the Austrian bus-campaign [DE]. Seems like Wiener Linien, usually not so shy about ads on their vehicles, refused the banners. There’s no official statement yet as to why they did, but according to organizer Niko Alm a written statement is expected later today.

I’m not terribly surprised, really, but I’m looking forward to the ensuing hilarity.