I really should start thinking of stories to accompany my images. Well, here’s one:

Yesterday we went to a supermarket stocked only with the most organically grown and produced items. And it was surreal. In a way it reminded me of the Contemporary Christian Music scene, in that it’s like a parallel universe. For every item in the real world, there’s a corresponding one in the other. In one case it’s music, in the other one it’s, say, salad.

We stocked up on a few things that we usually don’t get anywhere else, but also on some things we could get somewhere else but just thought we should check out there. Which was a bit of a mistake, because unless you’re rich, this supermarket was not made for you. Buying your groceries in that supermarket as you would buy them in any other, will bleed you dry, making sure you’ll soon be unable to live off anything else than organically produced pasta. Without the organically grown tomatoes.

They do have an impressive collection of tofu products though: 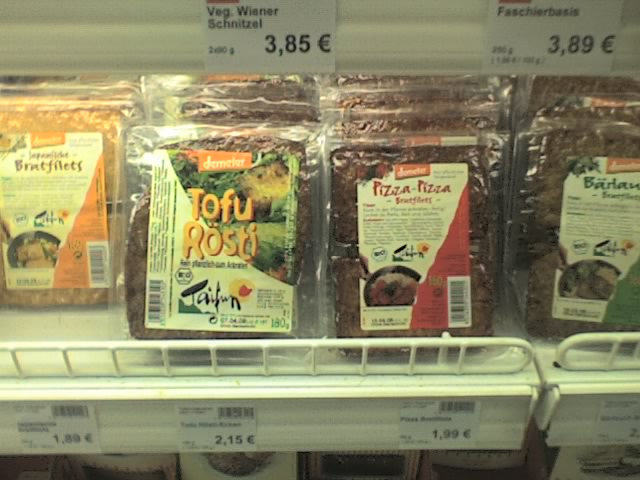 Seriously, I wouldn’t have a problem giving up meat if these things actually tasted the way they are advertised. Especially when other supermarkets are selling stuff like that: Even for me, who’s rather well versed in the meats, trying to discern what exactly they are trying to sell here is almost impossible. And why exactly they have to group it together in that way is absolutely beyond me.