And here’s to Christmas. At least when it comes to the header of this very blog, where I’ve once again put to use my insane Gimp skills to create what you might call a very superior Christmas header image.

Apart from changes to the design, bloggers like me also receive early Christmas presents. One of them was a package in the shape of tube, containing three cans of a drink. But I’m getting ahead of myself.

A few weeks back, I, like a few other people, was addressed by a representative of a PR-company in Switzerland, offering me a drink with the luring name “Walrossalkohol”. Which, and even if your German is rudimentary you might have guessed that, can be translated into the English language as “Walrus alcohol”. Anyway, me being both extremely adventurous (especially if adventure is sent directly into my flat) and quite partial to the various ways of imbibing alcohol, decided to graciously accept the offer. Oh, how I was looking forward to this strange new drink, imagining nights of debauchery similar to what the poets of the 19th century experienced with the aid of la Fée Verte.

Well, a couple of weeks later I received a mysterious tube: 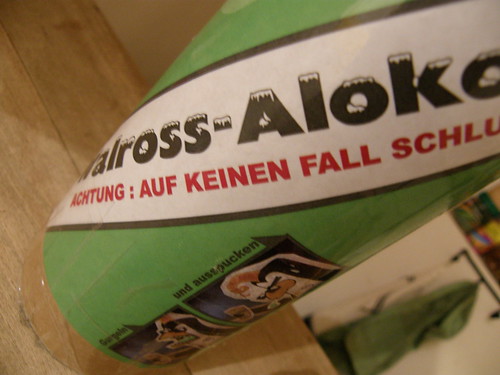 Anxiously I ripped open the wondrous package, only to find what inside? Utter disappointment! For all it contained were three cans of a drink similar to what you might know as Red Bull, void of anything even slightly resembling hard, hallucinations-inducing alcohol. Burying my dreams of a poetic shindig, I opened a can, took a sip and lo and behold, it contained a drink very similar in taste and effect to above mentioned Red Bull.

This marks the end of my recount. Goes to show that early Christmas presents aren’t always as wonderful as you might expect them to be. But thanks anyway.