Judging from the euphoric reactions to my last posting about that awesome rice pudding, I will not hesitate to detail what I put into my head this morning. With a lump of mozzarella left over from a previous dinner and a tomato sitting idly on the counter next to the fridge, it wouldn’t have taken a man with my IQ to concoct the following. 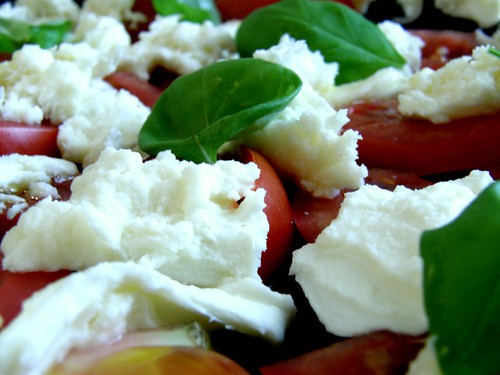 As the ice had apparently been broken, I decided on another drink for the bunch: some apple-balsamic vinegar. And even though you’re taught early on that nothing good can come of mixing drinks, they all seemed more than happy with my decision. Being a good host I threw in some snacks as well: salt and pepper were well received by all involved in this late-morning shindig.

I let them enjoy it all for a few minutes before breaking up the merry get-together by sending them down my hungry gullet. That’s one hang-over they’ll probably never forget.