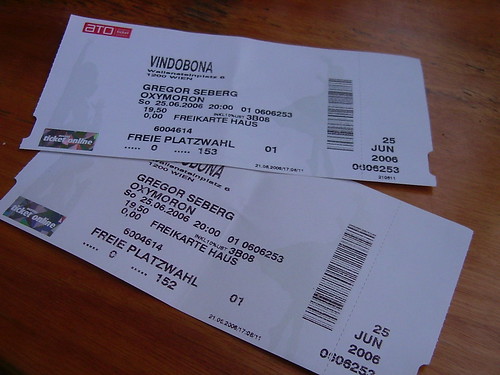 Two days ago, my girlfriend and I decided to flee the scorching heat of our apartment and have a drink at a cafe before dinner.

Well, as we were half-way through our beers, a woman came up to us and asked us if we’d be interested in free tickets to a stand-up comedian’s show that was to take place half an hour later at the theater next to the cafe. Maybe the fact that she had to go from table to table in order to get rid of her excess tickets should have been a hint.

Oh well. We went in there, it was reasonably cool (if you’ve ever been to our apartment, you’ll understand that cool rooms are just about the only thing we’re looking for these days), and we awaited the performance of the mistery man, mildly content over our good luck as receivers of free tickets to an otherwise rather expensive show.

Now, I don’t want to go into detail about the show itself, but I still don’t understand why anyone would ever let this guy on stage. The program was riddled with the oldest and worst jokes, subsequently producing not much else than disgust and boredom.

We left during the intermission, and I pity everyone who actually paid 19,50 € to see this guy.