I am not much of a sun-person. Actually, that’s not true anymore. I used to be wary of the sun, mainly because its main purpose seemed to me to send glares into my flat which would then put a glare on my monitor, making it a fucking nuisance to use my computer.

Now, I know how esoteric that sounds, and all I can say is: it’s not esoteric, it’s science. It’s fucking science! Who taught me that? Well, Carl Sagan of course.

I’ve always held an interest in science, albeit in a superficial way, one that doesn’t demand long hours in labs. And, I’d heard about Carl Sagan before, but it was mostly confined to comment sections of Reddit or some other place where people with brains that don’t match their occupation tend to hang out.

Recently, or rather a couple of months back, I ordered Cosmos, the science-series with Carl Sagan, mainly because I’d read so many good things about it. And they were all right. Cosmos is by far the most intelligent, insightful, reflected and interesting show on science I’ve ever had the pleasure to watch. And even though I know that there’s a shitload of people involved in writing a series like that, it is mainly due to Carl Sagan. That man simply knew his stuff but also knew how to convey it.

And just like that, he managed to instill in me an appreciation of the sun like I’d never experienced before. When earlier I was annoyed by too much brightness, today, when I look at the sun, I can’t help but think of how Carl Sagan described where we came from, what we are and where we are (probably) going.

It’s a shame the man died as young as he did, because I think we’d have good use for a Carl Sagan nowadays to remind us of the bigotry and pseudo-science that still dominates public discourse.

Here’s to Carl Sagan and the sun.

Coming Monday, Moby will release his new album “Destroyed”. For everyone else who doesn’t feel like waiting, the album can now be streamed on a special subsite of Moby’s website. But there’s more to it. From the intro page: i don’ 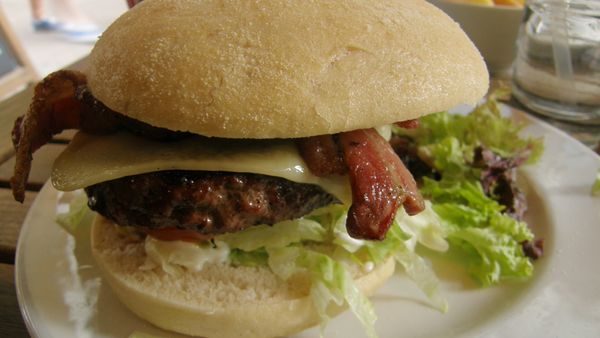 Being the cosmopolitan man about town that I am, I went to London to check out a few places to eat. That’s not entirely true, and by “not entirely